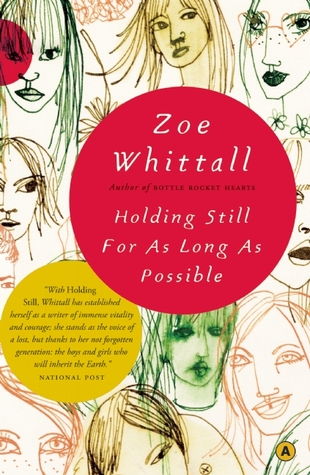 This was selected by my Goodreads Canadian Content group as the monthly group read for August, in conjunction with our monthly challenge to read books about LGBTQ characters or written by LGBTQ authors. I was happy that my library hold came through in time to read it for the group read and challenge.

The story follows a group of twenty something friends in Toronto as they try to figure out what they’re going to do with their lives, something a lot of people that age struggle with.  Josh is a transgender male who is a paramedic and we get a lot of inside info on what kind of toll that can take on the EMTs who save lives on a daily, or, in Josh’s case, nightly basis. Amy is his girlfriend, bisexual and a filmmaker. Hillary, who now calls herself Billy, used to be a famous pop star but is now struggling with severe panic attacks. Roxy seems to be the glue that holds them all together, the mutual friend that they all met through. Josh and Amy’s relationship is falling apart and Billy’s just broken up with her long term girlfriend.

There are new crushes, old loves, and people are just trying to figure it all out. The sexuality of the characters is secondary to the story, really. It is what it is. It doesn’t seem like the lives of these gay/trans characters are any different than others in the same generation, all facing adulthood, still not really settled into responsibility for the most part, Josh aside, who has a very responsible job but still, his personal  life is in upheaval. The story, the friendships, the getting-on-with-things, and that last push to full on adulthood, that’s what it’s about.

I did like the book and the story told from mainly three points of view, Josh, Billy and Amy. From my point of view, someone old enough to be a parent of any of these characters, it was a little harder to relate to them. My twenties were a lot more stable though they did end in divorce. It was a quick read and the second of Zoe Whittall’s I have read. I will be reading more from her.