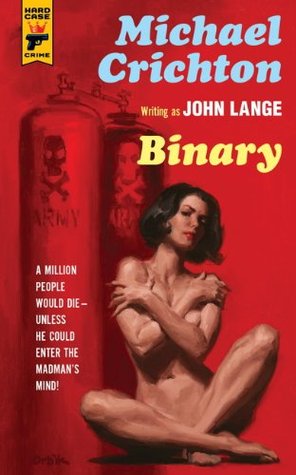 This short novel by Michael Crichton writing as John Lange early in his career, was actually the last one of 10 he wrote under a pseudonym between 1966 and 1972, 3 years after his first novel published under his own name, The Andromeda Strain, hit the best seller lists.

Binary is a thriller about the chase to prevent an insane man about to unleash a chemical weapon on San Diego on the weekend of the Republican Primary, with the President in attendance. What the naked woman on the book cover has to do with anything other than book sales, I couldn’t tell you! Very Pulp Fiction and of its time, I guess.

It’s a short novel, really not more than a novella in which Agent John Graves must piece together the clues to figure out what the impending attack will be, where and how and then work against a very clever villain who keeps one step ahead of him all the way. It’s real edge-of-your-seat stuff though the clues are almost painstakingly slow to come together at times because the reader knows more or less the nature of the attack and Graves does not.

Still, even in his early days, it’s evident Crichton can put together a page turner and it’s interesting to read some early computer-related stuff like how long it took to send a few pages of information by a telephone wire to be printed on the other side of the country and how data would be hacked and stolen. Cutting edge stuff in the early 70s but would be in a museum these days!