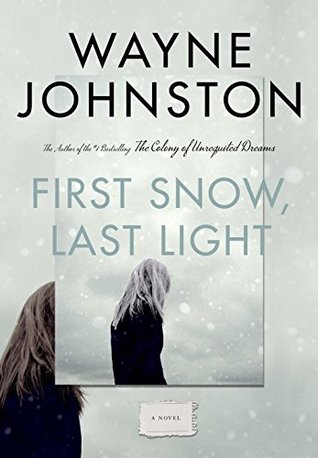 We begin with a 14 year old boy, Ned Vatcher, who comes home from school to discover his parents are gone. They’ve disappeared without a word on the day of the first snow storm of the winter, in St. John’s, Newfoundland, November 1936, leaving him behind. Ned has come home from school to an empty house and a mystery. He runs to his sports coach from school, Father Duggan and ends up with his father’s family, a family of fishermen who have already lost one son to the sea. He grows up to make a life for himself in media and other businesses but his parents’ disappearance continues to haunt him. What happened to them? Why did they leave him behind?

A couple of years ago, Wayne Johnston wrote a fictional account of the life of Joey Smallwood, the first premier of Newfoundland called The Colony of Unrequited Dreams. It featured a female journalist, the enigmatic, alcoholic and reclusive Sheilagh Fielding. First Snow, Last Light is told from Ned’s point of view and also from the point of view of Fielding, which is great because she was such a strange and engaging character in that first book. Johnston also wrote The Custodian of Paradise which is mainly about her though I haven’t read that (yet).

Ned’s parents’ disappearance colours his life as he grows up and becomes a wealthy businessman in Newfoundland. Sheilagh Fielding had made friends with his father and reconnects with Ned, his adopted son, Brendan, and  Father Duggan. The novel follows their lives while we wait to see if the mystery of Ned’s parents ever gets resolved. There are twists and secrets, and the ghosts of the past haunt them all.

Wayne Johnston is a very talented writer and his characters are complex with many layers. Ned is not particularly likeable, nor was Smallwood in Colony of Unrequited Dreams but Fielding is again the best character in the book. I wonder if the trilogy of books isn’t really her story, rather than those of Ned Vatcher and Joey Smallwood. I really enjoy his books and they haven’t let me down yet.

This was a Netgalley book for review. It is released in September 2017.