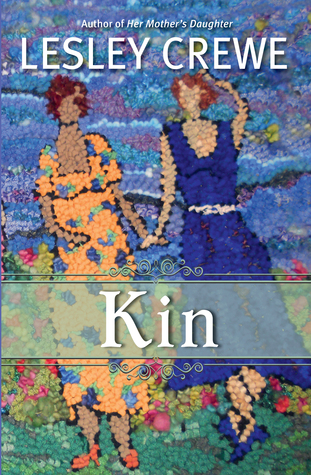 Kin is the story of siblings Annie and David Macdonald and Annie’s best friend Lila. It traces their lives and their subsequent families from the 1930s into the millenium, mainly based in the Glace Bay area of Cape Breton, Nova Scotia. I don’t get to read that many books based in my home province and always enjoy the ones I have found. Lesley Crewe is a fairly new author for me. She writes books about friendships and families, mostly all pretty relateable (though the last one I read, Hit & Mrs, was a bit off the wall).

I usually always enjoy a “family saga” book, one that traces several generations. I also usually find that the first and second generation are more interesting and have more detail than the later ones. In this case, most of the book focusses on Annie, David and Lila. The next generation doesn’t really get as much of a look in until a good 2/3 of the way through the book but having said that, it’s still about the family as a whole.

Family, marriages, relationships, friendships. Good times, bad times, tragedy, birth and death. Just like life. The writing style was a bit different again from the other two books of hers I read, which were each different from each other. This one seemed to have more of an ordinary feel which might have been deliberate since it was about an ordinary family. I enjoyed the mostly Cape Breton locations with a bit of Halifax and Montreal thrown in. Lots of familiarity there for me. The characters are also believable and when you can see that their life decisions feel like a train wreck, you find yourself riding along with them, waiting for the inevitable.

The author doesn’t shy away from the difficult and tragic events and a couple of them are particularly sad. But again, that’s life as we all know it. We all survive and deal with devastating events and losses and hopefully we have the support of a strong family to help us get through.

I have many memories of my father that are book related. One of them was that he would always be trading books with his twin brother and they’d always ask each other when they’d visit if the other had any books to borrow. Another was the sight of him sitting in his easy chair, listening to a police band radio with one ear, and the other eye on his book, sometimes even looking up and keeping an eye and ear on the TV if there was golf or bowling on the screen. If there was a hockey game on, he wouldn’t pick up his book until the intermissions and couldn’t understand how I could read and watch hockey at the same time!

A few years ago, my home city of Halifax, Nova Scotia was building a brand new central library. They were raising money with a campaign called Share the Wow. You could donate to the library fund and receive a personalized book plate and then could put it in any book in the library that you wanted to. I decided to do that, and had it personalized in memory of my dad who died in 2006.

I knew what sort of book I would pick. We generally didn’t read the same kinds of books but he would read one I might recommend if it had a good story and wasn’t too “girly”. Primarily, he liked westerns and stories that took place during wars, fiction or non fiction. Dad especially loved to read about people that had fought in or lived through World War II. He was a boy during that period in Halifax, which was and is a major naval base. He remembers it vividly. He also worked with a man who was a prisoner of war and he found those stories interesting, too. He had some older brothers who were in the navy and the Merchant Marines during the war and he always told us about selling newspapers during the war when there was often an “Extra” edition of the newspaper with war news.

I received my bookplate and off to the library on its grand opening day I went. I found where the non-fiction books on military history were located and browsed until I found a likely candidate. It’s called Grandpa’s War in Bomber Command by the late Jack W. Singer. He was a Canadian from Ottawa that joined the Royal Canadian Air Force in 1944. He was assigned to No. 9 Squadron just after the D-Day invasion, after his training in England. He wrote it as a memoir for his grandchildren and it was later published. There’s an excerpt from it here. It seemed exactly the sort of book my father would have enjoyed so I put the plate inside the flyleaf.

I like to think that book is still there, a little piece of my dad on the page.

My love of reading comes honestly.  Books were always in our house, in our hands, on our bedside tables,  stacked beside the chairs and sofa where we’d have our favourite spots to sit. We feel out of sorts if we run out of reading material.  English class was never a chore when I was in school (though occasionally, the books I had to read for class were, but more on that another time.) The gene has only successfully been inherited by my niece who loves to read. One of my nephews reads sometimes, but the other’s interests lean towards gaming and he’d rather watch a movie or a tv series than read the book on which it was based. My husband reads but not as voraciously as I do and we do share some common literary interests.

I can’t imagine my life without the printed (or digital) word. Starting a new book is always a thrill of anticipation. Now, you must excuse me. My lunch break is nearly over and I want to read a few chapters before I get back to work.